Turns out it was behind the couch the whole time…

As more and more people discover my upcoming travel plans of hitchhiking around the world, the question I hear the most often is,  “How are you going to hitchhike over the ocean?”  After I resist the urge to smack them upside the head, I politely explain that I’m flying over the oceans and hitchhiking the land bits (and I suppose the smaller water bits but most European ferries have started charging per person as opposed to per vehicle)

A close second is, “Where did you get the money to do this?”  My favorite answer is, “Pocket change.”

I suffer from a rare disorder called “Coin Hording”. I doubt A&E will ever do a series about it. For years, my ex-wife used to call me the “Change Magnet.” She was convinced that I could leave the house with $20 dollars in my wallet, make two quick stops and come back with $3.50 in change.  I used to think maybe I was blacking out and reverting to my alter personality, a hobo who would stand on the corner and panhandle whilst whistling Roger Miller’s “King of the Road”.

The simple fact is that I’ve always seemed incapable of reaching for change when paying for an item of any value.  I’d go into one store and buy something for $8.20.  Eighty cents went in my pocket.  Three minutes later, I’d be buying a 75 cent donut using a five dollar bill. Later in the day, I’d buy $72.56 worth of groceries and pay with a hundred.  I wouldn’t give it a second thought until I got home, got undressed and all my change would end up on the nightstand.  None of it ever found it’s way back into my pocket.

The disorder was serious enough while I was living in the United States.  Things really took a downward spiral when I moved home to Canada. In the States, they have pennies, nickels, dimes, quarters and the rarely used Kennedy half dollar.  But here in Canada,  although we phased the penny out of use in 2012, we have Loonies and Toonies! ($1 and $2 coins). 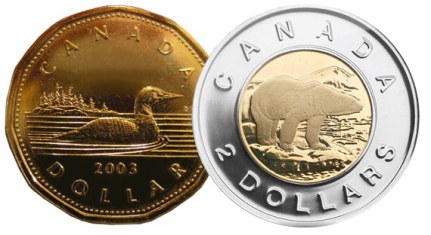 Too make matters worse, every day at work I collect two tip envelopes for my prior day’s hours. One for the night hours and one for any graveyard shift time.  In these envelopes is between 25 cents to $4.75 in change as well as, fortunately, plenty of folding money as well. And where has the change been going?  Right into my pocket, of course. Then right onto the night stand.  My disorder was at a new low.  22 Months at my current job. Night after night, the change built up. I was keeping it in boxes, in zip lock bags, in nightstand drawers.  Eventually I was keeping it all in plastic Dryers Ice Cream Buckets in the top drawer of my dresser.  One evening, not long ago, I opened the dresser drawer…and the whole thing capsized from the weight.

When I first started thinking (dreaming?) of this adventure, I knew the change was going to be play an important part.  I estimated I had a little over $900 in change.  Well, even a novice sneaker-tramp knows you can go a long way with $900 on the open road.  So I started sorting.  And counting. And sorting.  And Counting.

I stopped sorting and counting once I reached about $1500CAD in just Loonies and Toonies. There was plenty more not even including the two buckets of dimes, nickels and quarters.  It was time to get serious.  I got stacks of coin rolls and started rolling…and rolling…and rolling.  My girlfriend came over and joined in the fun and within a couple of hours…Behold!  The Great Pyramids of Badger!

My fingers already hurt and I resigned myself too the fact I’d never get through the nickels, quarters and especially the dimes (Canadian dimes are VERY small and thin) so we made a quick run to the Coinstar machine where I begrudgingly gave up an 11.9% fee in exchange for a five minute quick sort.

For a grand total of $2516.68.  Over and above the cost of airline tickets, insurance and equipment (which so far have run me about $1200) I think $2516.68 is an excellent budget for a two month, worldwide hitchhiking adventure.  But don’t worry, I have more than enough in case of emergencies.

The moral of the blog is even you want to do something, the money is there.  You often just have to turn over a rock, or a couch cushion or two.

One thought on “Where Did You Find the Money?”