Things I have lost:

1) The first sign I made for my adventure. I put a lot of time into it. It was bright yellow and read “Hitchhiking Around the World”. It became the first casualty of my adventure, as I watched it blow down the Trans Canada Highway within minutes of starting my journey.

2) The book that I bought for downtime entitled “Command and Control,” a nonfiction piece about the history of the Cold War. Didn’t even get a chance to crack the cover. Its current location is unknown but somewhere before Winnipeg. I hope wherever it is, somebody is reading it, and enjoying it as much as I was told I would.

3) My e-cigarette, vape pen. My hope was that I would be completely off cigarettes by the time that this journey ended. It was excellent for a quick hit on the side of the road, especially for a lifelong nicotine fiend like myself. Smoking while hitchhiking has got to be a bad idea. Current location: I left it in the cab of the first trucker who pick me up in Medicine Hat, Alberta. I’m glad that’s where I left it because he had mentioned he wanted to get one for himself in order to kick the cigarette addiction also. I hope he’s using it and wished that I had left behind a tasty e-juice for him as well.

4) Car charger: this is the item I’m most upset about having lost up to this point. I absolutely must replace it as access to all the information on my cell phone is imperative. I often wonder how people did what I’m doing before the invention of the Android cell phone.

Things I have abandoned: 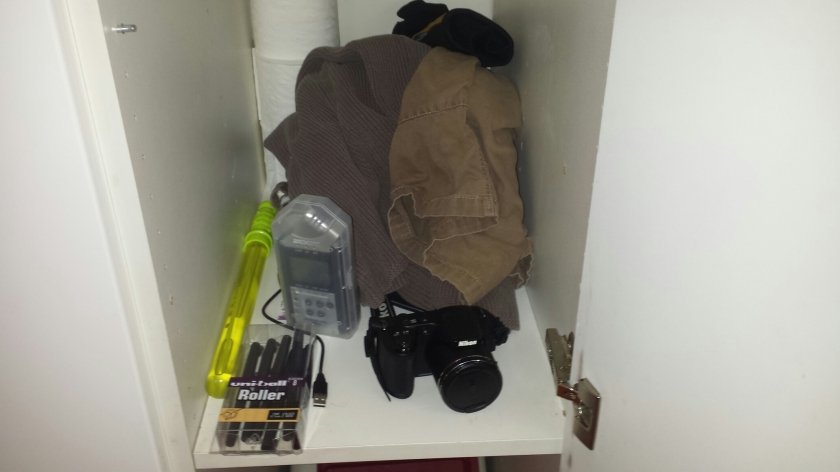 The gloves I bought in Medicine Hat, the grey sweater, my board shorts where the zipper doesn’t go all the way up comma my new Nikon camera that I can’t seem to get the pictures to transfer over to my laptop properly, 1 box of pens because depends I like to write with are only available in a 12 pack and I only needed two, 1 pack of 24 Duracell double a batteries, in most upsetting, my Zoom HPN mobile podcasting device, which I believe I will need to return because as far as I’m concerned right now it is a piece of garbage. Distortion and feedback even in the most controlled environments. Very disappointed that I will not be able to do the podcast on this trip. Very pleased that this now gives me an excuse to do another trip just like this.

On the whole, I am relieved and pleased to announce as I’m beginning the journey between Toronto and Montreal, I have managed to decrease my carrying weight by five to seven pounds! As of last night, everything that I brought with me which I have neither lost nor discarded can all fit in my larger backpack. After I use the knapsack as my carry-on to Ireland, it can be discarded or donated.

Last night as I was going through the experimental shifting, figuring out what I no longer wanted to carry with me, the theme to the television show WKRP in Cincinnati kept running through my head.

“… got kind of tired of packing and unpacking… Town to town, up and down the dial…”

Off to Montreal! Happy travels, everyone!

2 thoughts on “In memorandum. Things lost and things discarded”

Shortly after my 50th Birthday, I got a wild hair to attempt to hitchhike around the world. My journey begins May 30th, 2016. Join me.
%d bloggers like this: