Winnipeg, Inuit Art, fun with my gays, barbecue and sleeping in the woods for the first time ever!

Winnipeg is the city of my earliest memories but I have no recollection of it beyond the street I grew up on.

Deposited on the edge of the city at about 1am, I was fortunate enough that the public transit still ran until almost two.  I was very grateful additionally that my host lived within blocks of the only bus there was to catch at the end of town. My poor host, Serhii, a mathematics teacher at UofM, waited for me until the wee hours as I finally made it at 230am.  We exchanged pleasantries, a couple of stories of the road and immediately went to sleep.  There would be plenty of time to get to know each other in the days to come.

The following day, I boarded the bus to Patterson Avenue, the street I have my first memories of.  Everything seemed so small.  The mansion I grew up in is a split level rancher.  The park where I played, a vast, green wonderland is small enough where I might be able to throw a baseball from one end to the other in two pitches and my daily trek down to the corner store is simply a three minute stroll. 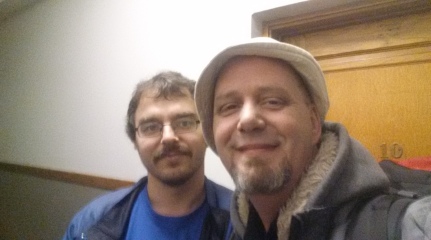 The evening was spent eating Indian food with my Ukrainian mathematics friend.  Serhii is a fascinating fellow.  Like many University teachers, he is surprised to discover every year another batch of students who received all A’s in math are coming into his more advanced classes with barely a fundamental understanding of fractions.  Like many, Serhii seems to be caught in the trap of having pursued that which he is good at (math) and abandoning that which he is passionate about (literature & travel).  By the end of the meal, we’d devised an idea for his first novel simply titled “The Mathematics of Hitchhiking.”  I really do hope he follows that dream and more importantly, that I get a dedication in the book!

Day two in Winnipeg had me impersonating my host (at his insistence, of course) in order to gain free admission into the Winnipeg Art Gallery to see the Marc Chagall exhibit using his WAG membership card..  To be honest, I know just enough about art and art history to get by at a cocktail party full of auto mechanics but, as the old saying goes, I know what I like.  Video two is my discovery of Master Inuit Stone Carver Oviloo Tunnilli.

After one slightly touristy event, it was time to hit the road again.  I love the expression “hit the road” especially “Time to” and “I gotta”.  City Transit out to the edge of town…thank you Google Maps and Winnipeg Transit.  A short 1K hike to the Trans-Canada and I am looking for a relatively dry place to set my knapsack.

First car, first thumb, first ride!  Just a short one but what a feeling!  My driver assures me that the short trip will be a better hitching location and I readily agree, hopping in the backseat long before I think “If I got my first ride off my first car within 30 seconds, how much better can the next spot be?”

My luck continues!  Less than 3 minutes later, Craig picks me up in a pick up (Been waiting the whole trip to write that phrase), I throw my bag in the back bed and we’re quickly on the road.  Another short trip and I’m dropped under the turn off to Stienbach, Manitoba.  I am always grateful for any ride but I am also amused by non-hitchers that THINK they know what a good hitchhike spot is.  Under the road is never great, unless it is raining.

Still, I must have a magic thumb.  I always start every hitching session by listening to the song “Free” by Stevie Wonder.  It features the lines “Free: Being nowhere and everywhere I choose to be” as well as “Free: Having nothing.  But possessing riches more than most.”

The song, which runs about 4 minutes, hadn’t even finished playing when a minivan pulls over and I half-sprint half-waddle after it with my 60 pound pack on my back.  My driver, Darren has a cold water waiting for me by the time I get to the passenger door.  Again, the amazing generosity of strangers never ceases to amaze me. 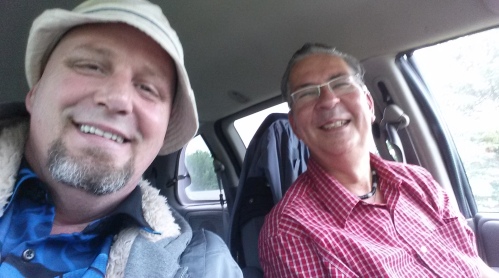 Darren works for Native Affairs of Manitoba and owns property out in Winnetka, Ontario.  He’s on his way to “cut the grass” at his cabin, which I gather is an all day affair.  By the end of the 2.5 hour drive, he’s inviting me out to stay at his cottage for the weekend, promising to introduce me to the McDonald Sisters, a gaggle of seven single women from ages 32 to 45 whom all love to party.  As enticing as this sounds, I assure him I must really get further down the road.  He drops me on the turn off to Winnetka and my thumb is out again.

Not the best spot.  Most cars turning onto the Trans-Canada are going very short distances so even if they were inclined to pick me up, they can’t see why I’d want them too.  The worst part is the geography of the turn off.  My spot is both at the bottom of a basin and on a slight curve.  Anyone travelling east on the TCH will only be able to see me for 3 to 4 seconds…hardly enough time to see how absolutely charming and handsome I am.

Not too terribly long though, I am in the backseat of Laddi and Sam, two adorable lesbians from Windsor.  Sam is in Kenora working as an Occupational Therapist for the next three months and her partner, Laddi is out for a visit.  On learning that I did not have a solar charger, they insisted that they bring me all the way into town to buy one. (I haven’t used it yet but probably still a good idea to have.

After a long comical ride, that involved having to return to my original destination because, somehow…and I still have no idea how, I left both my jackets on the side of the road…and their decision that they were going to take me a much greater distance until we found a “good spot” we discussed gender politics and the 5 different types of lesbians and who they are allowed/expected to date. 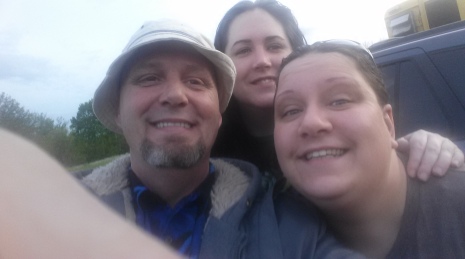 After a spot of barbecue, where I devoured a Philly Cheese-steak made with pulled pork we gave each other huge hugs, took selfies and I walked over to the on-ramp.

And then the sun went down…