The sun had gone down and I had not managed to secure a ride out of Vermilion Bay Ontario. Fortunately, one thing this neck of the woods has no shortage of edge of the woods. Trees, trees, trees!  As far as the eye can see in every direction… pics of course the truck stop which is 50 metres down Highway. 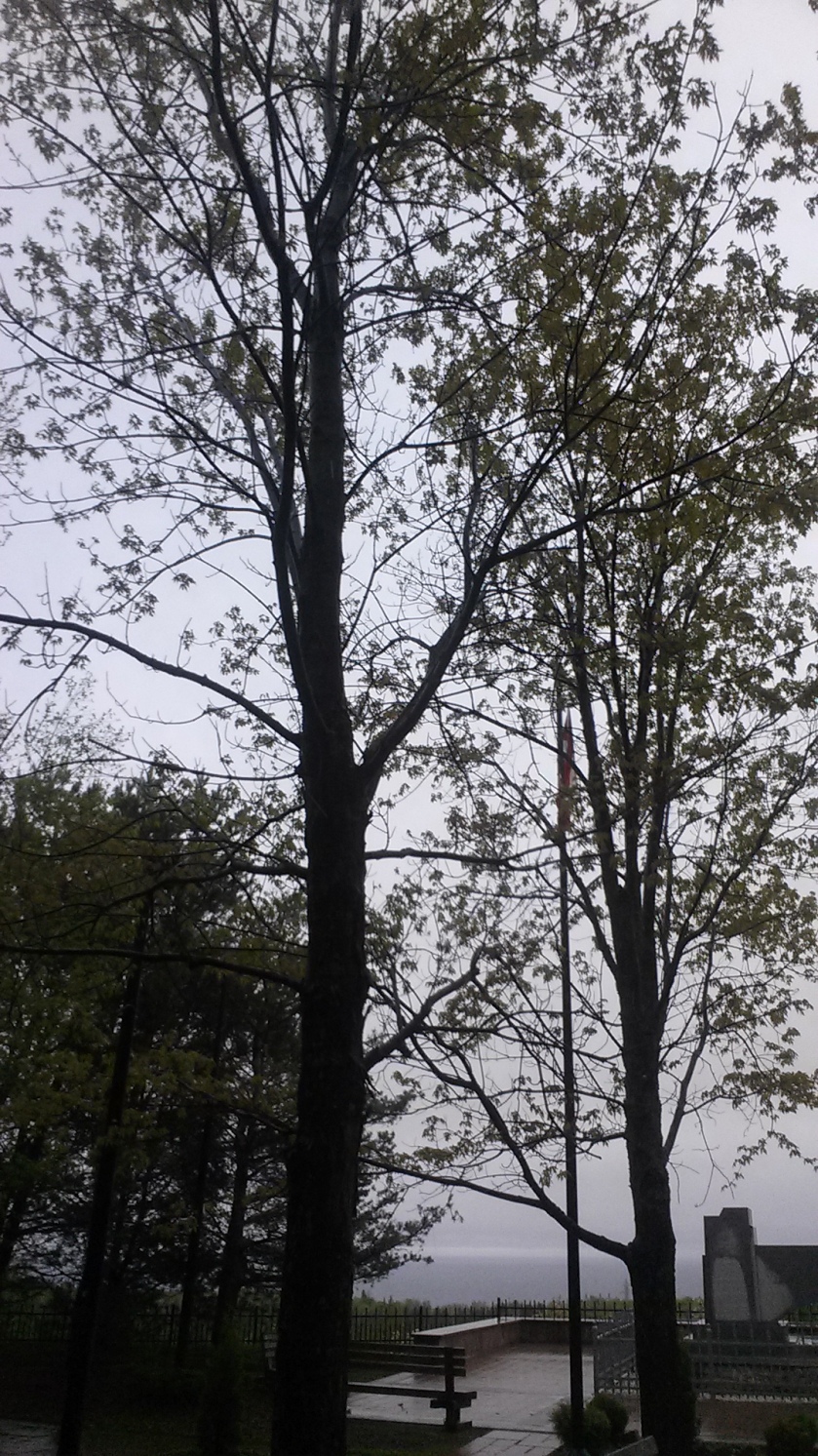 I feel as though I have prepared for every eventuality.
I purchased a sleeping bag which is rated to minus 22 Celsius. I have a bed which is promised to offer maximum comfortability with minimum weight. I have a 10 foot by 12 foot tarp in case the last three days of rain have left the brush and surrounding area damp. Additionally, thanks to my adoptive lesbian parents, I also have my small, inexpensive tent. The one thing I’m not there for, are the mosquitoes. I have a couple of friends in Calgary, who are from Ontario / Manitoba region and they’re assured me without a shadow of a doubt the bugs not be a problem that early in the season. Boy were they ever wrong! Not only were the monster blood sucker out in full force, they had abandoned any form of surreptitious nibbling on unsuspecting prey, preferring to adopt a multiple angledfull frontal Feeding Frenzy assault. These little bastards are willing to attack any exposed vein producing surface. I’m pretty sure one of them even tried to sting me in my eyeball. I I can only imagine the irritation that would come from getting a mosquito bite on your eyeball. How do you, in the name of everything that is natural, scratch your eyeball?

Resigning myself to sleep in the bush for the evening, and the truth be told someone excited about the prospect, I want it back over to the 24-hour truck stop, ready to play over inflated city boy trapped in the country prices for a single can of insect repellent. I was slightly more than mildly perturbed when I discovered the 24 hour truck stop , a feature they proudly advertised on their signage , was only twenty-four hours in the months of July and August. They had closed 15 minutes earlier sentencing me to the role of bug smorgasbord.

I strolled down the road found a path into a clearing about ten meters from the highway shoulder, spread out my tarp , laid out my bedroll and sleeping bag, look up to the sky and greatly assist but it didn’t looklike there was any more rain on the way. I put off setting up camp for so long it was Pitch Black in the woods and I’m relatively certain I would have had no success trying to set up my tent in the first place. I laid down , looked at the stars for a few minutes , allow the earliest mosquitoes to have a nibble or two, then folded the tarp over top of myself , closed my eyes it was even surprise myself as I gently , calmly drifted off for an evening of blissful…

“What did she say about bear attacks?”

It had all been part of casual conversation and as we found between Walmart and Canadian Tire looking for the aforementioned inexpensive tent in my solar charging panel that the lesbians had absolutely insisted that I get when one of the two of them mention the possible need for bear spray. Now I’m laying in the woods, completely exposed wondering just how common bear attacks in Northern Ontario actually are. I go from mild concern about waking up in the morning with a few irritating bites on my skin to a sudden paralyzing fear good I’m going to be mauled to death while I’m sleeping. Fortunately, in order to feed into my paranoia, although I found myself in my experience being in the middle of nowhere I still have ample cell phone reception. Here I am surrounded by all of the beautiful nature that Ontario has to offer, pulling up my reading glasses turning my phone back on, and Googling the Wikipedia page that has a complete breakdown of all the Fatal bear attacks in North America for the last 10 years. I learned that there’s only band once in such an encounter in the past three years and I’m happy to categorize bear attacks in the same column with terrorist bombings which is to say that my philosophy is and if you’re going to be killed by either of those two uncommon occurrences , your time has come and if the universe wants you dead that desperately it’ll choke you to death with a chicken bone.

I snuggled into my brand new sleeping bag prepare for a cooler evening spent in the woods. I was covered in hair from head to toe who is a buddy, sweater, t-shirt, jeans, socks. Unfolded my trusty Hitchhiker’s Guide to the Galaxy purple towel into a pillow size nugget and placed it on top of my shoes. It is only over the course of the next 3 hours that I learned that a sleeping bag rated  – 22 Celsius can turn out to be rather uncomfortable when the overnight low where you are sleeping only tips to a balmy + 14. My socks are pulled off first, soon I ditched the hoodie , the sweater, then the T-shirt, and finally the jeans and my Captain America underwear. I could have laid there and waxed poetic about being reborn into the world comma but all I was really concerned about was a giant mosquito stinging my penis.

Despite all my concerns, I did eventually fall asleep surrounded by silence and total darkness I have to admit it was one of the more peaceful night’s sleep that I’ve had in several years.

( once again, find reader, understand that I am writing in the blog post using a speech-to-text application. Sometimes the application has a problem recognizing words so, as always, please feel free to private message me any errors that you see)

Shortly after my 50th Birthday, I got a wild hair to attempt to hitchhike around the world. My journey begins May 30th, 2016. Join me.
%d bloggers like this: