A disappointing day trying to get the hell out of Quebec City and calling into question what I call this adventure now. 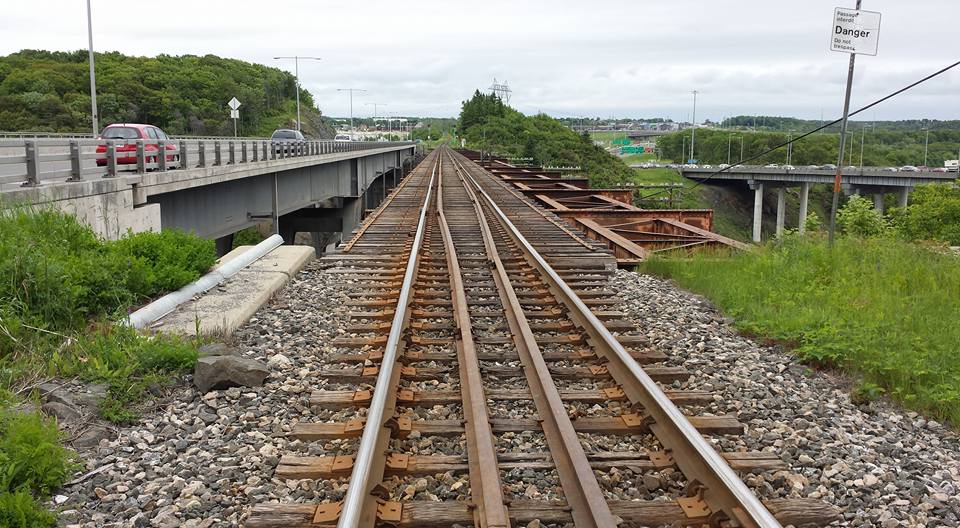 It’s been seven days.  I’m finally ready to write about it.

My disappointment is severe.  I am struggling to not allow it to affect the rest of my adventure.

I blame myself.  I was enjoying my ride with the Brazilian Jui Jitsu team so much, I didn’t notice that they were bringing me across the bridge into Quebec City.  A small alarm was going off in my head.  I’d looked at maps of Quebec City.  It’s quite a ways off of the highway.  What is worse is the bridges are long.

But that’s not the worst, I’d come to discover.

After checking into one of the last hotels in town (I hate paying for hotels, especially when there is an event in a city which takes up every spare bed in town), I awoke and for Pont Du Quebec, the one walking bridge out of the city.

But it doesn’t get you out of the city.  Just to the other side of the river.  After that, it is another small freeway with no shoulder.  I walked in every direction but couldn’t find a hitchhiking spot where anyone willing to pick me up. Every spot ranged from categorically unsafe to catastrophically awful.

I find glorious train tracks.  After about a mile, the ground under the tracks gives way to a bridge withnothing under the ties but the raging St. Lawrence River.  I’m not ashamed to admit I don’t care for heights, especially the looking down at certain death part.  I braved a few feet but saw that it was at least a careful 10-15 minute transverse and, even if I didn’t slip and fall through the tracks, if a train came along, jumping would be my only option.  Even if the fall didn’t kill me, lugging a 50 pound pack meant that I’d sink to the bottom of the river like a stone.

I walked back to the city.  Avenue Du Hotels was no better.  Five freeways out of the city and no where to hitch.  I stopped and got a bite to eat (I’m five hours in, at this point.) I poured over my  google maps and thought I saw a route I hadn’t attempted yet.  It was close and I opted to try.

I couldn’t find a passable route but what I did find was the VIA Rail station.  In six hours, there was an overnight train to Halifax.  With my plane to Dublin now only 36 hours away, it was a hard decision to make, but I made it.  I bought the ticket.

I tried to look on the bright side.  Although I love subways (love em) I had never taken a train adventure.  There is a mystique surrounding rail travel I have never been a part of. Perhaps there was something about it people were onto.

The only way I can describe Via Rail travel is the way to go if taking a greyhound bus is just too classy and quick.  The only positive is that the seats are slightly roomier.  But it is slow.  Sorry, not effective enough.  Slow as in sloooooooooooooooowwwwwwww.

18 hours on a train (the only cheap way out of the city since Greyhound doesn’t operate inside of Quebec City) stretches to a grueling 20 hours.  Depression washes over me because I KNOW if I could have made it to the damn highway, I would have been in Halifax hours earlier…and whether my “hitchhiking around the world” tag would still qualify.  That part really got me.  When I first set out to plan this trip, I almost booked a flight out of Montreal but my feeling was that if I was going to see the world, I should start by seeing the part of Canada, my home and native land, that I’d never set foot it.  Now, there it was, streaming past me out the window, mostly in the dark and I was $181 poorer for the experience.

I managed to jump off the train in Moncton so I could at least say I set foot in New Brunswick but the train rolled on and so did I.

We arrived in Halifax at about 630pm, two hours behind schedule and fortunately it gave me enough time to get to the hostel. The staff was pleasant and the guests were fun but one hot girl rubbed my nose in my defeat by having hitchhiked from Quebec City just that afternoon. (Note to self: Next time I try this, bring a hot girl.  Or be a hot girl)

A few hours sleep and I’m at the airport in Halifax. The rest is a blur.

I’m asleep on a couch in the St. Johns Airport.